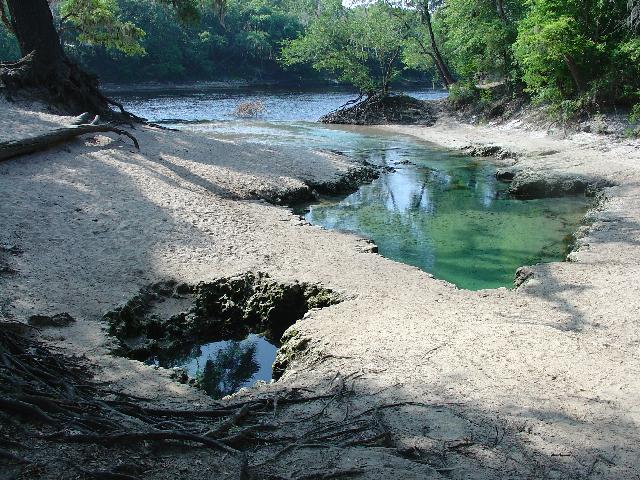 Telford Springs is located off of State Route 51, located along the Suwannee River as you are driving from Mayo toward Luraville. After crossing the bridge over the Suwannee river, take the first dirt road on your right hand side. The turn is located across from the Truck Inspection Station. Drive a short distance until you reach a stop sign. Turn right. Drive a little less than 1 mile bearing to the right and you will reach Telford Springs. Telford is an undeveloped facility popular with the locals for drinking and swimming. Car break-ins and vandalism are not uncommon.

Telford Spring is open to any certified Cavern or Cave Diver. There are no entrance fees or waiver requirements. There is also no staff manning the site, nor are there any facilities.

The spring in located in the along the Suwannee at the end of a short spring run, much like the neighboring springs in the Peacock, Cow, and Little River systems. There is comfortable parking space for a dozen vehicles.

The system includes a spring entrance at the head of the run to the river and two sink holes a short distance away. Bare dirt banks slope 20 feet down gently to the large basin of the Telford head springs. The cavern is located at the north-west end of this basin; a natural bridge runs perpendicular to the cavern entrance. Depending on the level of the Suwannee, the natural bridge will either be a few inches above the level of the run or else under several feet of water.

Telford II can be seen from the surface by looking for a large sink hole several dozen yards to the northeast of the head spring. Telford III (aka Terrapin) is about 75 feet to the west of Telford II. A small parking area dead-ends at the south end of Telford III. Telford III had been considered an appropriate entrance to the system. However, the flooding throughout 1998 has resulted in severe erosion of the walls of the sink. To prevent further destruction of the cavern environment, divers are encouraged to use the head springs as the entrance to the system.

The cave offers an astonishing variety of landscapes: low ceiling passages, very high ceiling rooms, rock floors, sandy floors, silty floors. Some passages look so sharply carved in the rock that one would never guess that it is a limestone cave.

Telford has a reputation as "the first to blow, last to clear" when the Suwannee River basin enters into flood stage. Telford seldom has as good of visibility as Peacock, Cow, or Little River; the water typically carries a high amount of particulate with the flow. However, when the visibility is good Telford can reward a diver with some of the most beautiful cave formations in the region. The average depth of the cave is 50 feet. Proficient cave divers will find that their primary light burn time will be the factor that limits their time in the cave.

Passage from Cavern to Telford III

The cave begins with 300 feet of low and silty passage named the mud flats. The depth at the ceiling is 40 feet. In short order, you will cross both Telford II and III. You should gap the line when crossing both sinks as visibility can be eliminated should anyone attempt to enter the system through II or III while you are in the cave. The stretch from III downstream to the head springs is often littered with trash tossed into the sinks. Please do your part for cave conservation and pack out some of the junk on your way out of the cave.

Telford exhibits a drastic change of landscape when you enter The Rifts, after a few hundred feet of low and wide passage upstream from III. This section is just over 400 feet long. It looks like an inverted T with a wide horizontal fissure and a vertical crack with a height superior to 30 feet. The depth at the ceiling is 50 feet. If you look around the base of the Rifts you'll notice several jumps to small sections of the cave.

The cave then opens up into a series of larger passages reminiscent of the Peacock System, although not quite as large. This section is called Beulahland. The rock is very white. The tunnel is 61 feet deep on the ceiling and about 300 feet long.

The cave then gradually gets shallower (up to 48 feet on the ceiling in the Geothite area) until you reach the Ripple Canyon, which is another vertical narrow fissure about 2500 feet into the cave. After another 100 feet or so the cave opens up again in a wide and low ceiling tunnel with parallel lines.

The closest fill station to Telford Spring is Dive Outpost on 180th Street, near the Luraville intersection. The closest hospital is in Live Oak. Emergency Medical Services and police protection are provided by Suwannee County.

The locals often gather on this site and entertain themselves with alcohol and loud music. You should always lock your vehicles before going diving and hide valuable objects out of sight.