Peacock state park is one of North Florida's most popular dive sites for cavern and cave diving. With a total of nine entrances and exits, Peacock is known as a complex karst system. Six of the nine openings are easily accessible, however three of the openings are only used as emergency exits. The karst windows in the system vary from spring, siphon, in-line sink, and off-set sink. When choosing an entrance in this system, care should be taken to match your skill level and training to the dive site. Bonnet Springs, although on the Peacock State Park property is considered a separate, advanced cave dive. The entrance to Bonnet is locked; access is limited to full cave divers who have been introduced to the system by a diver with previous experience in Bonnet. Additionally, Bonnet has been closed to diving for several years now due to the presence of a known Alligator; stay tuned for status changes.

Due to the low flow characteristic of Peacock, the visibility is often affected by seasonal water level changes in the Suwannee river. The caves of the Peacock often are dark with tannic water during the rainy winter months. The park is well maintained and offers many acres of unspoiled North Florida wilderness for the nondriver. 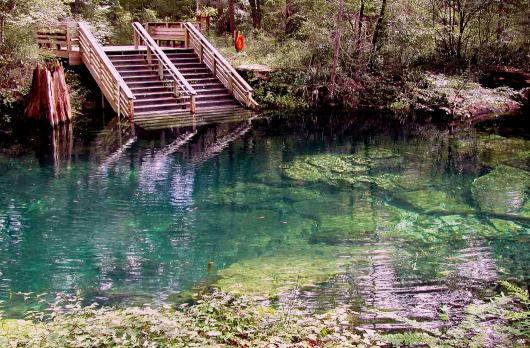 Challenge Sink can be found by parking on the north side of 180th Street, one hundred yards west of the park entrance, and then by following a small trail fifty yards north into the woods. Challenge is a perfect example of an in line sink-hole. However, you can deduce from the name or by looking at the sink that it is one of the two sites used only for emergency exits. Challenge is also known as the half-way point between Orange Grove and Peacock I. Due to the complexity of the system and the distance involved in the mile traverse, the dive from Orange Grove to Peacock I should only be attempted by experienced divers after being properly set up.

Orange Grove is the first sink hole that you'll see after you enter the park. This site is a classic example of an off-set sink. Orange Grove remains covered with duck weed through most of the year. The north edge of the sink has a fifteen foot shear drop, with the other half of the basin gradually slopping into the woods. The Orange Grove basin is one of only two areas in the park where cavern diving is allowed. The open water portion of the basin reaches a depth of fifty to sixty feet. The cavern zone begins on the downstream side, sloping to one hundred feet. The upstream entrance starts at seventy feet behind a few trees that have fallen into the sink. The main line is located approximately one hundred and fifty feet up this passage way. The main tunnel varies in depth from thirty to seventy feet. The first nine hundred feet of this tunnel are low profile, with the classic Peacock deep silt bottom. Most often the clearest water in the system can be found on this side of the Peacock system due to a water source tunnel. This tunnel is marked by the first jump on the right, around nine hundred feet in.

Cisteen sink is found to the west of Orange Grove and shares the same large depression. The entrance is very small, extremely silty, and covered with thick duck weed. This site is another of the emergency exits. 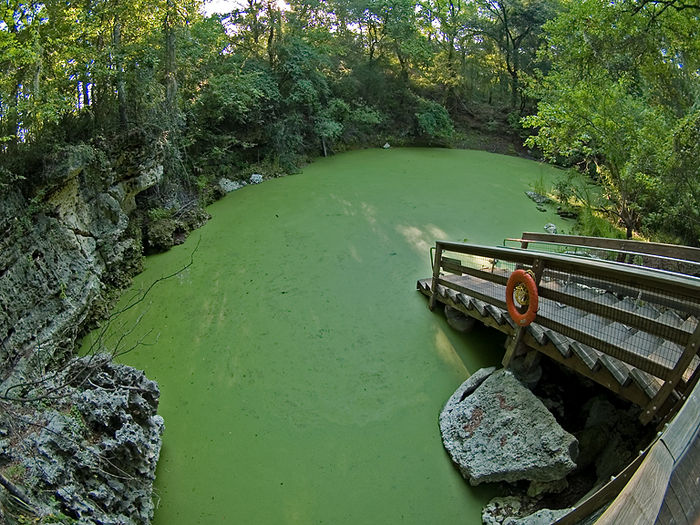 Olsen is found on the left side of the road as you continue into the park. Due to the limited daylight zone in the upstream--as well as the downstream--cavern diving is not recommend at this site. The upstream tunnel is found on the north side of the sink and leads towards Challenge. On the way to Challenge you will pass through several large tunnels and a unique keyhole-type window.

Entry is not permitted at Olsen Sink.

Pothole is found on the surface by continuing into the park from Olsen, on the right side of the road a few hundred feet before you reach the main parking lot. Pothole is the third sink in the Peacock system that is considered a window only--the entrance was previously used only as an emergency exit but is unstable topside and is no longer passable under any circumstances. From within the cave, Pothole can appear to be deceptively large--by covering one's primary light in this area the opening can be seen in the tunnel for divers traversing from Peacock I to Olsen.

Peacock I, II, and III are all found near the park's main parking area.
Peacock I is the primary spring in the park for cavern and cave divers. Two main tunnels connect to form a large cavern zone directly under the wooden steps that lead to the water's edge. The tunnel leading towards Pothole is found straight back under the steps leading into the spring. A small tunnel can be found on the far right side of the cavern leading toward Peacock II, but this tunnel does not offer a connection that divers can pass through. A lengthy swim to the left of the cavern zone, over a large area of breakdown rubble, leads to a separate line connecting off to the Peanut tunnel. This tunnel is found on the right, three hundred feet from open water. The first three hundred feet of this tunnel are only fifteen to thirty feet in depth before leading into a large breakdown room. Beyond the breakdown room, depth varies from thirty to seventy feet. Twelve hundred feet up the Peanut line, on the left, there is a jump that leads to the Water Hole exit. Two hundred feet past that jump, on the right, you will find the crossover tunnel. This tunnel sets up a circuit back to Peacock I. Four hundred feet past the crossover tunnel there is a jump on the left, one hundred feet off the line, that leads to the second water source tunnel for the system. The Peanut tunnel line ends two hundred feet past the water source tunnel, just on the other side of the Peanut restriction.

Peacock II is found a short distance down the Peacock run. As stated earlier, there is no cave entrance here. The basin of Peacock II is fifteen to twenty feet and is perfect for a cool swim on a hot day.

Peacock III is a siphon; its basin is formed by the out-flow from Peacock I and II and is usually covered with duck weed. A large cavern entrance leads into the cave. Due to the siphon characteristic, the visibility in this system is usually between twenty to fifty feet. The main line is paralleled by maze of tunnels and has an average depth of fifty feet. A low, silty jump to the left, nine hundred feet up the main line, leads to the only spring tunnel in this cave. The jump to Henley's Castle can be found fifteen hundred feet up the main line, on the left. The line to Henley's Castle ends in a large room with a maximum depth of one hundred and eighty feet.

Water Hole is the last of the nine openings to this system and is located two hundred feet west of Peacock I, along a trail curving around the basin from the wooden stairs. As an off-set sink, Water Hole is usually covered in duck weed. Most people dive this site by making the traverse from Peacock I. The Water Hole tunnel offers a wide variety of geologic features, ranging from fissure cracks to bedding plains, unlike the typical domed ceilings and flat silty floors of the rest of the system.